How can we help you today?

Customizable options for filtering and viewing tickets for technicians. 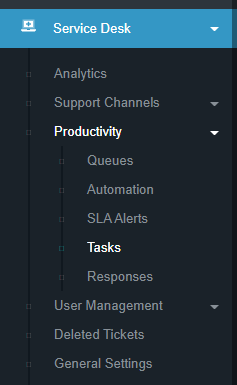 Queues: are configured to sort issues into categories for an organization. They allow for a quick filter for viewing and assigning support tickets as they come in.

Automation: Users can set up automation rules, to streamline their processes. Selecting a trigger, the criteria of the trigger and the action that will happen. As an example, if a ticket is created and that ticket originated from an Email, a rule can be set up to automatically email the user an email template stating that the ticket has been received.

SLA (Service Level Agreement) Alerts: Estimated response and fix times can be set within a ticket by technicians or defaulted to ‘time after’ ticket creation dependent on the organization's priorities setup. Users can then create SLA Alerts to notify staff via email of any tickets which are about to breach any SLAs.

Tasks: This functionality allows users to setup recurring tasks, which create support tickets with the values selected within the task creation. As an example, technicians may have recurring tasks that they need to complete daily, monthly etc. so rather than creating the ticket each time, a task can be created to trigger the creation of a ticket from a certain date and recurring thereafter.

Canned Response: This functionality allows users to create predetermined responses and resolutions to common questions and select these canned responses within support tickets. As an example: “This has been investigated and will be fixed within the next release” may be a common response to support tickets, instead of repetitively typing this out, users can select it from the canned response list.

Resolution Codes: This functionality allows users to create bespoke resolution codes for their organization, helping to identify the weak points throughout the organization and identify common trends.

Did you find it helpful? Yes No

Send feedback
Sorry we couldn't be helpful. Help us improve this article with your feedback.